One of the activities I get involved with from time to time is presenting at customer seminars. Recently I was asked to participate in an Azure round table event hosted at Mercedes Benz World.

The feedback from the event was great and two lucky customers were even able to take to the test track.

Updating the Template Image of a RemoteApp collection is a very easy process and can be achieved either via the GUI or PowerShell.

Browse to the RemoteApp service and select the collection that requires the Image updating. From the bottom menu click the Update button to initialise the Update RemoteApp collection Template Image wizard. 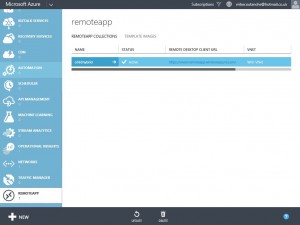 Once the Update RemoteApp collection Template Image wizard appears, select the new Template Image from the dropdown menu. Then choose how connected users are to be managed during the Image update.

There are two options:

Finally click on the tick icon to begin the update. 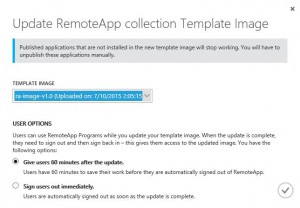 Once the RemoteApp collection has been updated with the new Template Image, open the collection and publish any new applications using the normal processes. 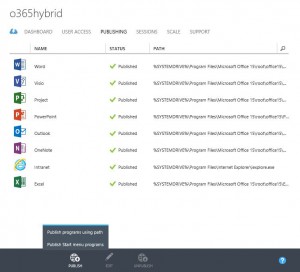 To update the Template Image of a collection, use the following PowerShell command altering the RemoteApp collection name to the one that you wish to update and the name of the new Template Image.

The RemoteApp PowerShell module has recently been updated with lots of new and updated cmdlets offering better administration. Below is a list of the cmdlets available since the latest update.

Hope this was of interest, even if short! 🙂 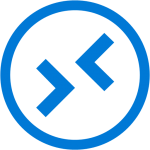 Provisioning Azure RemoteApp collections requires the administrator to us a preconfigured Server 2012 R2 image. In the same way as with RDS on-premises the image is preinstalled and configured with all of the applications that are to be published to the remote users.

There are three image sources an administrator can currently use when provisioning a collection.

The preconfigured images that Microsoft offer are great for having a quick PoC up and working in a matter of a couple of hours but the recommended option if creating your own is to use an Azure VM.

It goes without saying that plenty of planning should be done when looking to move forward with a production RemoteApp deployment. It is a great Azure service and there are improvements being made all the time but as with everything there are currently some limitations to work with.

As with anything Azure, things change rapidly but as of today, RemoteApp limitations to be aware of during the design phase are:

** Currently timeouts cannot be managed by GPO or configured by the administrator. They are only managed by the RemoteApp service.

There are two steps to creating a RemoteApp Template from an Azure VM. 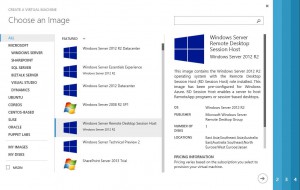 2. Connect to the virtual machine and install and configure all of the applications that you plan to publish later on. (Check the image creation tips at the end of this post.)

3. Now all applications have been installed and configured as required, the image needs to be validated. Because the VM was created using the RDSH image from the Azure Virtual Machine Gallery, we have the luxury of double clicking on the “ValidateRemoteAppImage” shortcut on the desktop. This script validates the virtual machine is ready to be used as a RemoteApp image and checks that it is configured in line with all RemoteApp pre-requisites. If all checks pass successfully, the script even offers the option to run SYSPREP for you!

If the script reports back errors, make sure they are resolved before continuing to SYSPREP the image.

To manually SYSPREP the virtual machine open an elevated command prompt and run the following:

(Do not use the /mode:vm switch even though this is a virtual machine)

4. Once SYSPREP has run and the VM has been shut down, capture the VM as a virtual machine image. To do this, select the correct VM from the list and click the capture button on the bottom menu. 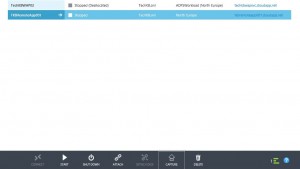 5. When the capture wizard appears, give the image a name, description and check the box to say that SYSPREP has been run on the virtual machine. Doing this will remove the VM once it has been converted to an image. The final step to the process is to click on the tick to begin the import.

Once complete the image will appear under the virtual machine images tab.

1. Browse to the RemoteApp service and the TEMPLATE IMAGES tab at the top. If it’s the first image in the library click on IMPORT OR UPLOAD TEMPALTE IMAGE to open up the next wizard.

If an image already exists, click on the + on the bottom menu bar to begin adding a new image.

2. Select Import an image from your Virtual Machine library (Recommended). 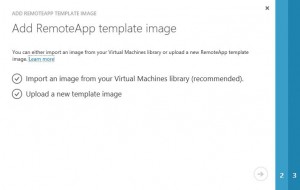 3. Select the Virtual Machine image from the drop down list and check the box to confirm that all the correct steps were taken in creating the virtual machine image. 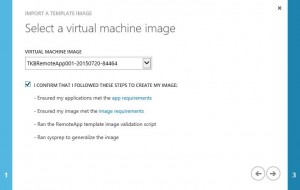 4. Give the RemoteApp template image a name and location and finish by clicking on the tick button. 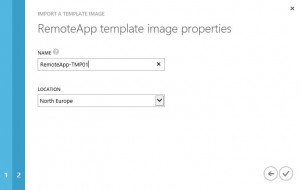 When imported, the RemoteApp Template Image is available to the administrator when creating a new RemoteApp collection.

It is possible as mentioned earlier in the post to upload an image that has been created on-premises and I may cover this in a later post, but using an Azure Virtual Machine is a much easier process and Microsoft recommended approach.

The following are a few tips that Microsoft suggest to use when creating the Template image:

That’s it for this post, its quite a long one but hope people find it useful. 🙂